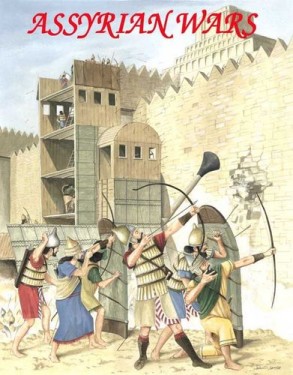 Assyrian Wars covers the time from 722 to 605. It´s the height of the Assyrian power who rules Mesopotamia with it´s overwhelming army. The surrounding countries have to pay tribute in return for peace. If they don´t, Assyria will punish them in a horrible way.

In the East, new forces a rising though: the Medes are gathering their tribes, and the Cimmerians and Scythians are  rampaging on the northern borders.

The game is highly asymetrical: Assyria is highly dominant and the other player powers (Egypt, Babylon, Elam and the Medes) can only try to unite and survive as long as possible. The game can go on up to five turns. In turn four,  the balance of the game changes dramatically. The Medes, through various restrictions forced to hold back until this moment, eventually unleash their hordes and times are getting hard for Assyria.

This asymetric play makes it hard for a gaming group: it takes about 30 to 40 hours to play this beast, of wich most of the time Assyria is dominating and a great part of the actions is done by a single player. When the dynamics finally change, Assyria might fall apart in a very short time though, and then the game suddenly ends. Definitely not for everyone although it might be historically correct.

The rules a horrible…terribly organized with a poor layout. Many concepts are overly complicated: The trade and especially the diplomatic and political aspects. However these concepts do not have the impact for the game that you would expect considering their complexity here. Assyrian Wars doesn´t give you the decisions and depth you would expect from a game that goes on for so many hours and comes with tons of fiddly and often unnecessary rules.

I did a playthrough here and I´m having some ideas for some houserules here.