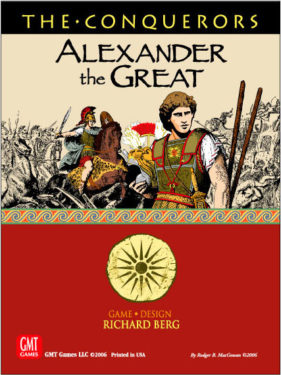 Alexander the Great covers the famous conqueror´s campaign against the Persians and their leader Darius. It´s a two player game using a chit pull system and point to point movement. The very asymetric nature is the real interesting part of the game. Alexander and his soldiers are militarily far superior to the Persians. It´s nearly impossible for Darius army to win a battle….so their only chance is to slow the Macedonians down and cut off their supplies. During the game, the war weariness of the Macedonians and the injuries of Alexander himself become more and more a threat for the Macedonian player.

So in the end, it becomes an intense race: Will Alexander be able to conquer great parts of the Persian empire, kill Darius, marry a woman from his family, found Alexandria and become a living God before he´s weared down by the Persian resistence?

It´s an solid game, not too complex, although the rules are a little vague here and there. It´s also questionable, if, in a multiplayer game, the Persian player can really enjoy it. Especially at the beginning, the superiority of the Macedonians might be quite frustrating for them.

You can see a playthrough here.